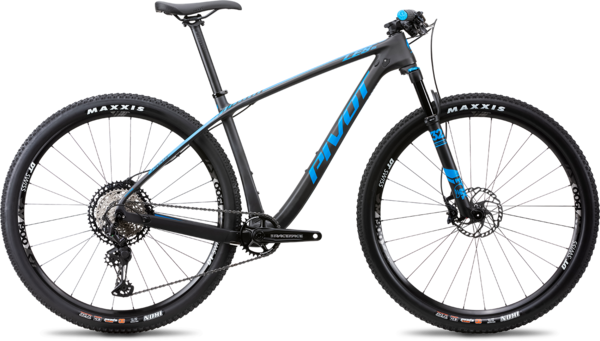 The Racer's Edge
On the right course, nothing is faster than a hardtail, and nothing delivers the stiffness to weight ratio and raw speed as a Pivot LES SL. The LES SL is engineered to the Nth degree to deliver the kind of handling, extreme power transfer, and low weight that transforms every last watt of output into a race-winning performance.

A New Paradigm in Hardtail Performance
A tenth of a second gained here, a hundredth there, over and over across the length of an hour and a half long cross country race really add up at the finish line. The LES SL is up to three-quarters of a pound (that's 300 grams!) lighter than it's already svelte predecessor making it a racer's dream that can turn seconds saved into minutes—all while retaining the quality and handling that has pushed Pivot athletes to cross country race wins at the elite level across the world. With new carbon dropouts, an integrated headset, and new layup schedule utilizing Hollow Core Molding Technology and cutting edge carbon materials, the LES SL is by far the lightest hardtail we've ever built. Pivot's race-winning hardtail legacy takes a quantum leap forward with a lighter, faster, and sharper-edged tool with only one goal in mind: getting from point A to point B as fast as possible.


Progressive XC Geometry
When a bike racks up wins and course records in races around the world and is the weapon of choice for our World Cup XC, Tour Divide, and 24-Hour racers every time the course is smooth and fast, you know that geometry is dialed. That's why the LES SL retains the same great fit and handling that has made the LES a favorite with our elite racers across multiple disciplines. New school cross country race geometry relies on slacker head angles, shorter stems, and longer reaches for the kind of stability that excels over the longest races and technical World Cup race courses with razor-sharp agility that makes it a short track racer's advantage.

* Subject to change without notice.